Litecoin vs Ethereum: Key Differences and Which Is Better? 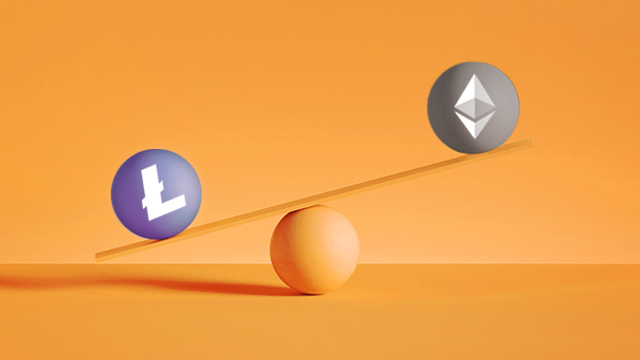 If you’re a newcomer to cryptocurrency, figuring out where to begin may be a daunting task by itself. You’ve likely heard of bitcoin — both one of the first cryptocurrency coins on the market and also the most widely purchased — but did you know there are a great many other digital currencies to choose from as well? As of March 2022, there were more than 10,000 separate, active currencies.

It’s easy to be apprehensive or unsure when deciding something as important as where to invest your money, but choosing the right coin doesn’t have to be stressful.

Read More: What Coin Is Best for You?

The rise of bitcoin allowed for the introduction of cryptocurrency to the general public, but many newer forms of cryptocurrency (also referred to as altcoins) have solved some of bitcoin’s unresolved issues. We’ll discuss two popular platforms for altcoins, Litecoin and Ethereum, which each have unique strengths and purposes.

What Is Ethereum and Why Do People Buy It?

Ethereum is a global, host-less software platform on which developers build blockchain-based applications that can run without being controlled by a particular company. Bitcoin enthusiast and programmer Vitalik Buterin came up with the concept for Ethereum in 2013, and the Ethereum blockchain went live in 2015. It was specifically designed to support the creation and execution of smart contracts. Bitcoin can also support smart contracts, but in a significantly more limited capacity.

Many cryptocurrency tokens are issued over the Ethereum network, and the currency used to facilitate those transactions is named, appropriately, ether (ETH). Although bitcoin beat ether to market by a number of years, Ethereum’s growth as a platform – and by extension ETH as the fuel that powers that platform – has seemingly limitless potential, versus bitcoin’s pre-existing supply ceiling of 21 million coins, of which 18 million are currently in circulation.

Given that Ethereum has essentially cornered the market on smart contracts, and also supports the acquisition of non-fungible tokens, or NFTs, there’s a reason why Ethereum has held fast to its #2 spot behind bitcoin. Smart contracts may play an outsized role in the development of Web3 technologies (a decentralized version of the internet based on blockchain technology, smart contracts, and NFTs), and many individuals and organizations have discovered their utility in the past few years.

Read More: What Are Smart Contracts and Why Are They Important?

What Is Litecoin and Why Do People Buy It?

Litecoin (LTC), a cryptocurrency that uses peer-to-peer technology to quickly send payments worldwide, was built using bitcoin’s source code in 2011 by MIT alumnus and former Google employee Charlie Lee, whose goal was to create a faster, fairer, cheaper, and “lighter” version of bitcoin.

LTC is four times faster to mine than bitcoin, and features very low transaction fees, as opposed to Ethereum’s higher gas fees. Litecoin is often referred to as the silver to bitcoin’s gold.

Since the Litecoin network can process blocks four times faster, the total amount of LTC released scales accordingly. This means the fixed amount set to exist will max out at 84 million coins, as opposed to bitcoin’s aforementioned 21 million.

Since its creation, litecoin has consistently stayed popular among the its altcoin peers, which is no surprise given its speed and low fees. Moreover, since LTC is seen as a well-established coin on the market, many merchants that accept payment in bitcoin accept litecoin as well.

Read More: What Are Gas Fees and Why Are They So Expensive? 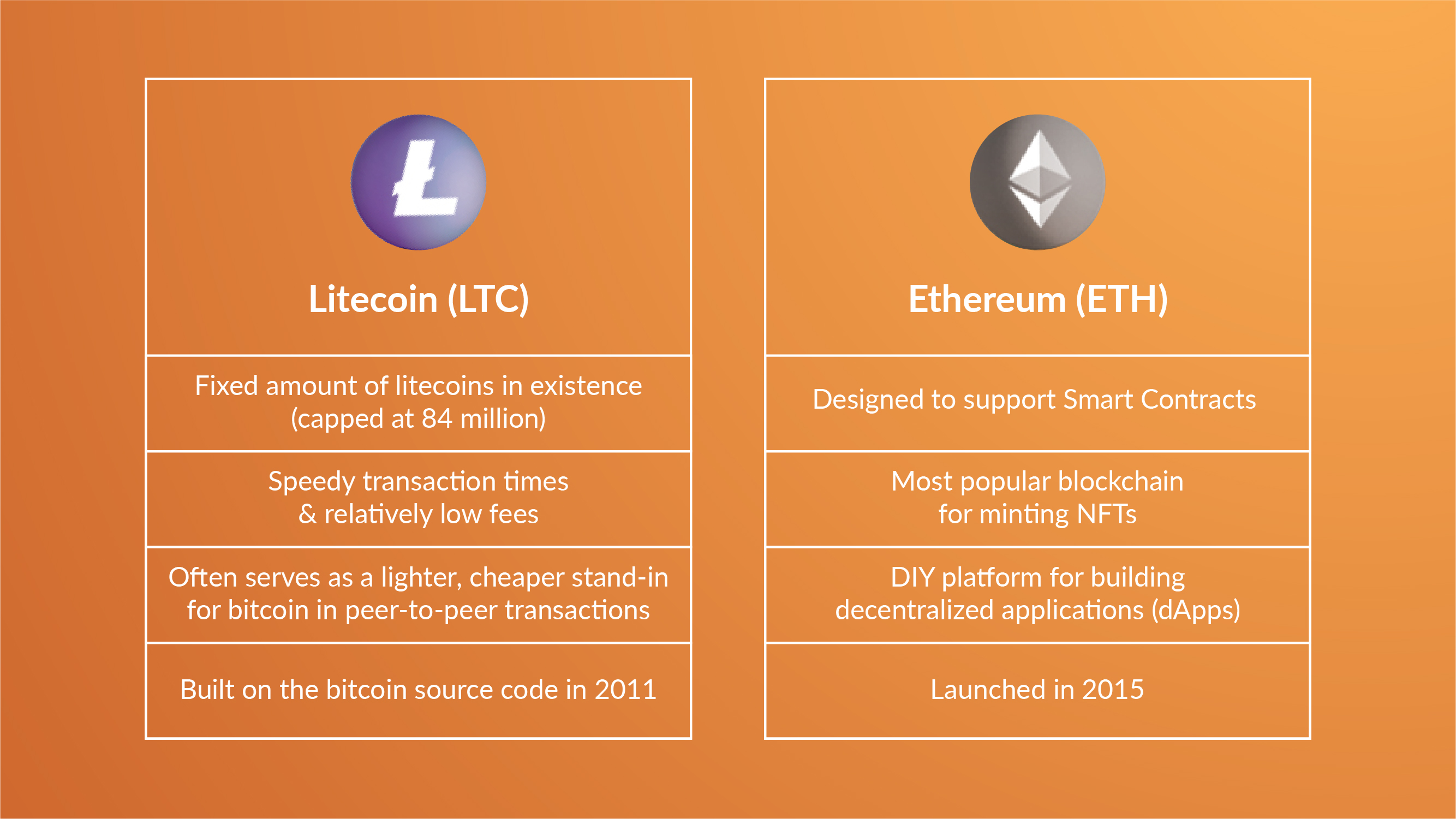 How Do Ethereum and Litecoin Compare?

As you may now surmise from descriptions of both, comparing Ethereum and Litecoin is a bit of an apples-and-oranges situation. Consequently, their individual token price tends to be quite different, not only because of the difference in their functionality, but also because LTC has a limited market supply while ETH does not.

For all of its efficiency and usability, litecoin competes within a large market of altcoins, making it unclear if it will ever be widely adopted the way bitcoin has been. However, as bitcoin use continues to grow, it will be increasingly difficult for its network to handle the volume of transactions. In this case, litecoin could be seen as a reliable second choice for handling similar types of transactions with lower fees.

Conversely, the Ethereum blockchain network has tremendous potential for building decentralized applications and smart contract execution, but thus far it remains to be seen if that will translate to the ether token becoming more usable and widely adopted for practical use. It does bear repeating, however, that it consistently ranks second overall in consumer trading, far ahead of litecoin.

Because of its unique network structure and versatility, the Ethereum network boasts an enthusiastic community of supporters and developers that Litecoin simply does not have. Nevertheless, many crypto investors choose to purchase both ETH and LTC in the interest of a diversified DeFi portfolio.

The more consumers get to know ETH, LTC, and other altcoins on the market, the more power they’ll have to make informed investing decisions as the crypto market matures. And if you do decide to invest, CoinFlip is here to help in the buying process every step of the way.