Get ‘Em While They’re Hot: 3 Tips for Entering the NFT Market

NFTs or Non-Fungible Tokens have been around for a while now, but their popularity has skyrocketed in the last month. In August, the NFT market saw more than $3 billion in trading volume, according to data from Dune Analytics. To put things into perspective, that is close to a 1,000% increase in trading volume from the previous month, which topped off above $325 million.

NFTs are absolutely blowing up, and it seems like everyone is trying to get a slice of the digital pie. Even mainstream institutions like Visa are buying, recently spending $150k on an 8-bit avatar to call their own.

If you're feeling a little lost in all this hype, I can assure you that you are not alone. Today I'm taking a closer look at this recent wave of NFT mania and sharing some essential tips on getting involved with the NFT marketplace.

The concept of NFTs is incredibly broad. They can be used to tokenize literally anything from real estate to basketball cards. For this article, we are sticking with NFTs used for rare-collectible digital art and the communities behind them.

If this is your first foray into the world of NFTs, I recommend checking out our comprehensive NFT guide that breaks down the basics of non-fungible tokens.

What is the point of NFT communities?

I think many people are wondering what the point of NFTs are. Why buy digital art if I can’t display it on my walls for the world to see? Why would anyone ever spend so much money on something they can’t tangibly feel or use? The answer is actually pretty simple. The main draw of NFT art communities is the ability to participate in a cutting edge art-movement. Plus, the potential return on investment is a pretty good perk that cannot be ignored.

For wealthy people, spending hundreds of thousands of dollars on these collectible pieces is one way to diversify their investment portfolios. Fine art is one of the most popular investment categories for people of high net worth, so it is no surprise that this latest wave in fine art has seen investments from many notable names and companies.

For people of more average means, the latest NFT craze adds new accessible avenues of investment that were previously only available to the ultra-elite. You don’t have to buy your NFTs from fine art retailers like Sotheby's or Christie's. Anyone is welcome to participate in NFT minting or trading via online marketplaces.

Regardless of the size of your investment, one perk for anyone holding a collectible NFT is bragging rights. NFT holders get to don their artwork in their Twitter profile proudly, or if you work at CoinFlip, you probably use it as your Slack profile picture. Plus, ownership of some NFTs allows you access to exclusive membership benefits and many are drawn to the welcoming online communities centered around these art collections.

Now that you understand the attraction behind owning NFTs, here are some essential tips for entering the market.

3 tips for entering the NFT market

1. Do your research - know what you’re getting yourself into.

As I mentioned above, NFTs have been tokenizing art for a pretty long time. The first NFT in history, known as Quantum, was minted in 2014. Quantum is a pixelated image of pulsating geometric shapes that sold for $1.4 million in June 2021.

While Ethereum has been the most commonly used blockchain for NFT projects, the network's exorbitant gas fees have turned many users away from participating. There have even been cases where the gas fees for buying the NFT cost more than the artwork itself. In light of these problems, alternative smart-contract capable blockchains like Cardano and Solana (known as Ethereum killers) have gained popularity alongside the NFT craze.

With this in mind, let's look at some of the most popular swaths of crypto-collectibles on the market right now: 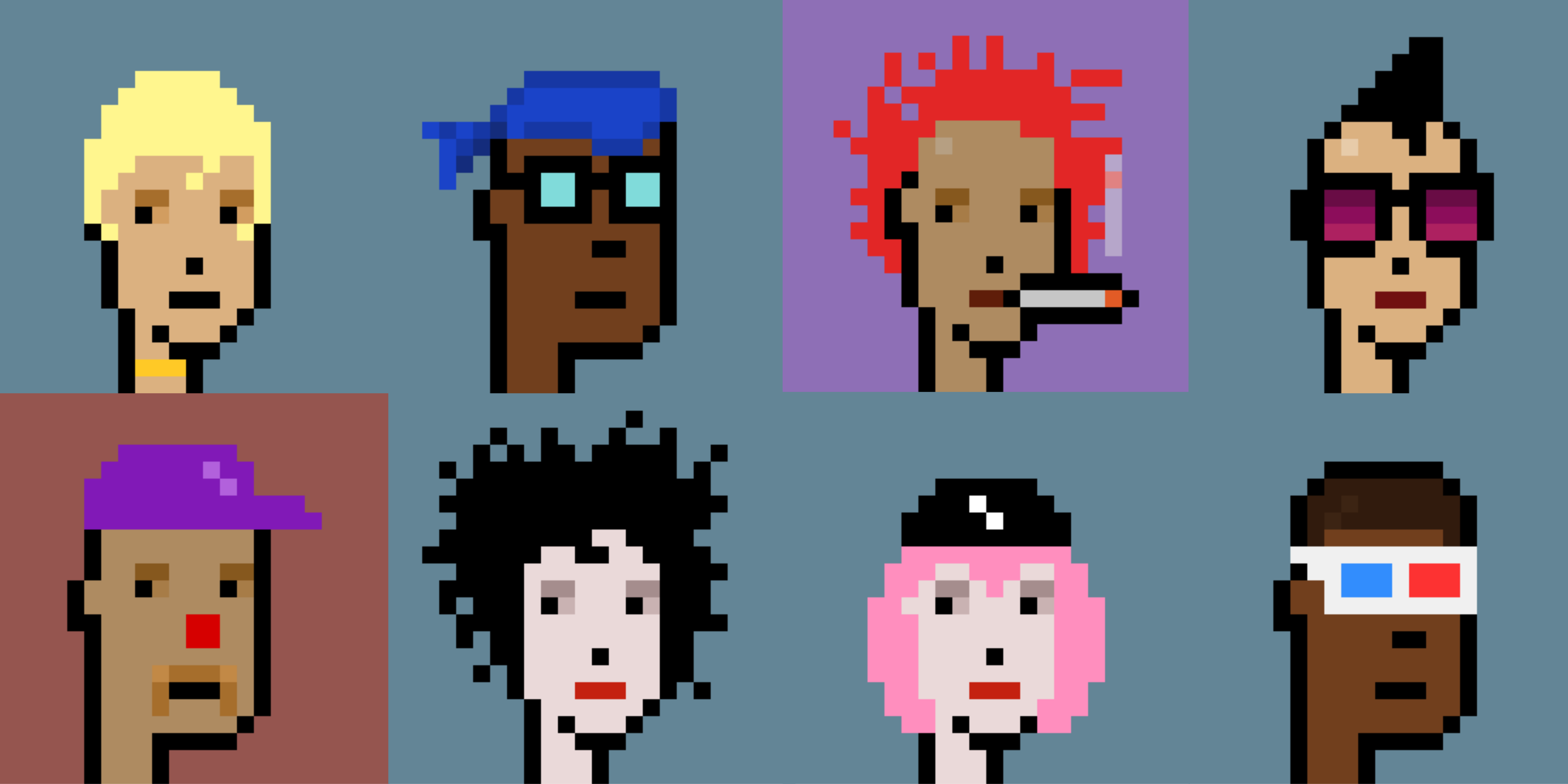 CryptoPunks by LarvaLabs is the first rare digital art NFT community. Launched in 2017, CryptoPunks is a collection of 10,000 unique, Ethereum-based, collectible characters initially given away for free to any claimers with an Ethereum wallet.

These simple characters reminiscent of 8-bit video games have since been canonized as NFTs of the highest caliber. They have sold for millions of dollars at Christie's, the fine-art auction house. At this time, the total value of all CryptoPunks sales is around $1.2 billion. Among the most notable CryptoPunk holders are Visa and Jay-Z.

CryptoPunks has paved the way for many more burgeoning NFT communities, many of which have taken off in the last few months. These communities typically feature dedicated corners of Twitter and Discord servers for sharing memes, reporting scams, and discussing updates. 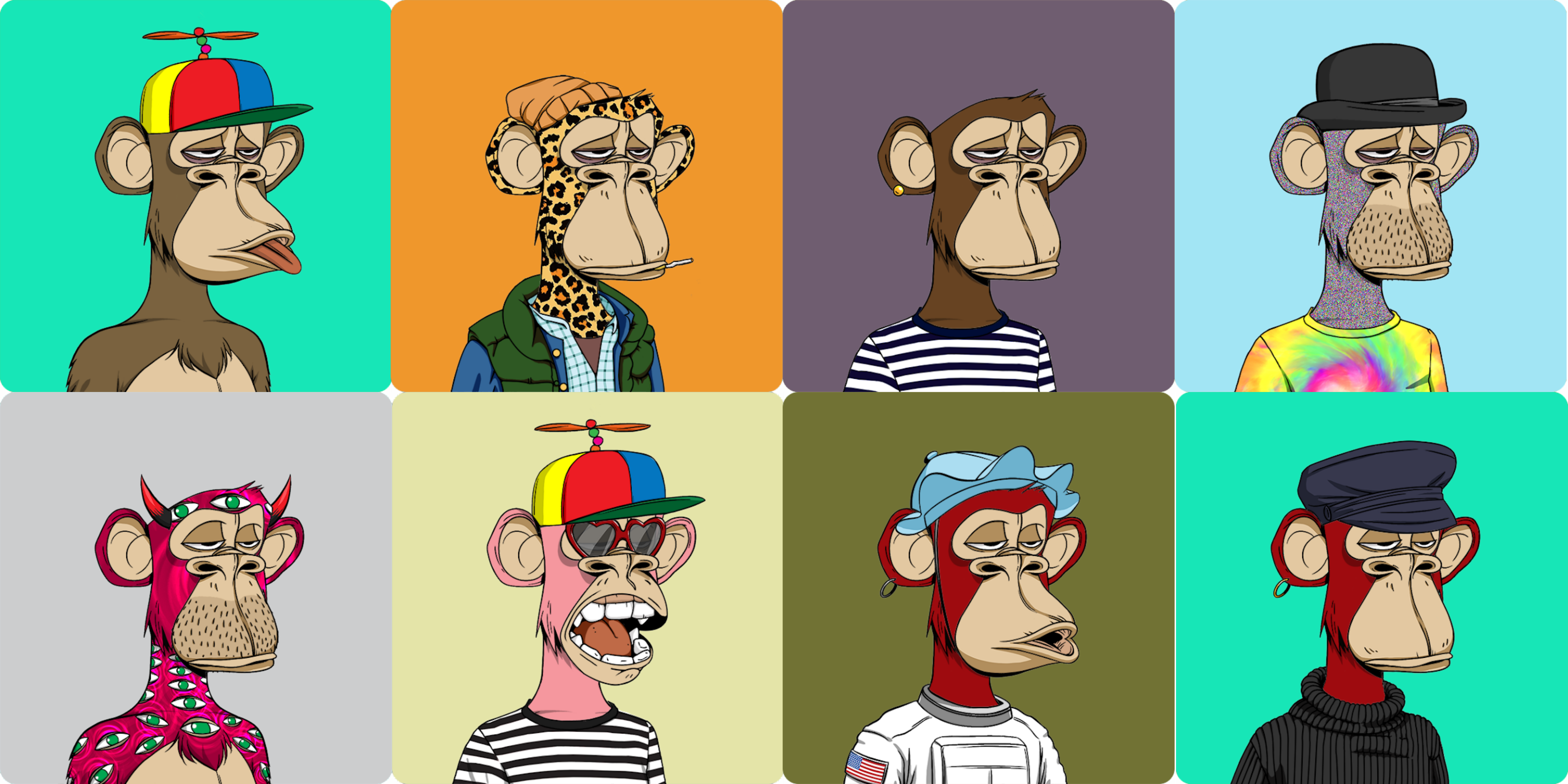 The Bored Ape Yacht Club is a collection of 10,000 bored-looking, Ethereum-based ape NFTs. These apes double as a Yacht Club membership card that grants you access to members-only benefits like THE BATHROOM, a digital graffiti board, among other perks that can be unlocked.

Compared to CryptoPunks, the art of each ape is much more detailed and stylized, with more than 170 possible traits that were programmatically generated upon minting. The Yacht Club is a relatively exclusive group with notable members such as NBA All-Star Stephen Curry. If you’re looking to add a Bored Ape to your collection, you can do so at Sotheby’s, the fine art broker, as long as you bid higher than the current bid at $19 million. Or via OpenSea, the top marketplace for Ethereum-based NFTs, for about 50,000 USDC for a more common primate. 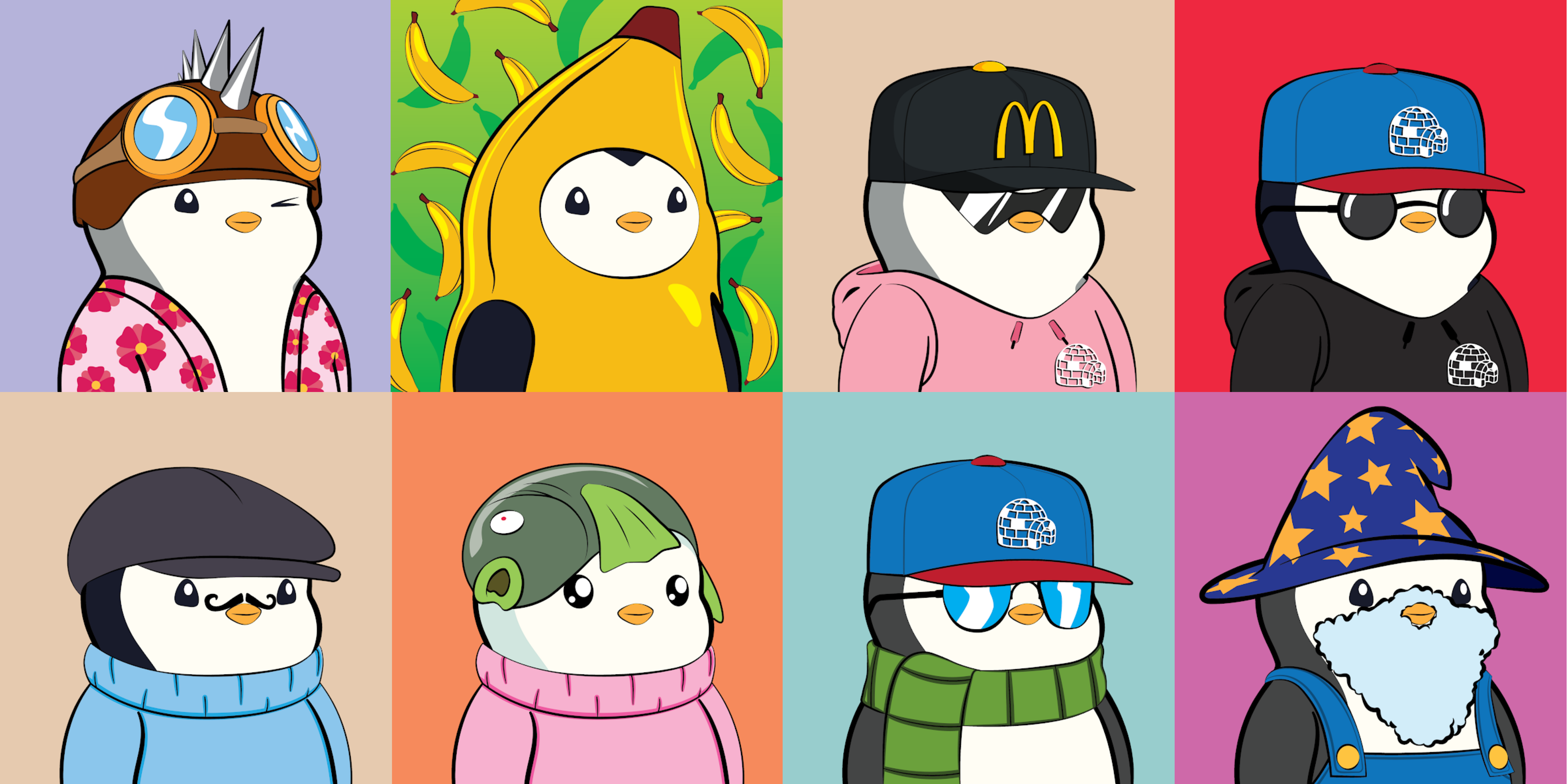 Pudgy Penguins is a collection of 8,888 unique, Ethereum-based penguin characters. Each displays adorable randomized traits, including different hairstyles, headwear, and costumes. Originally minted earlier this summer, these penguins became increasingly popular after the New York Times published a story about them. A quick search on OpenSea finds that one of these lil penguins can be yours for as low as 1.76 ETH or as much as 150 ETH. 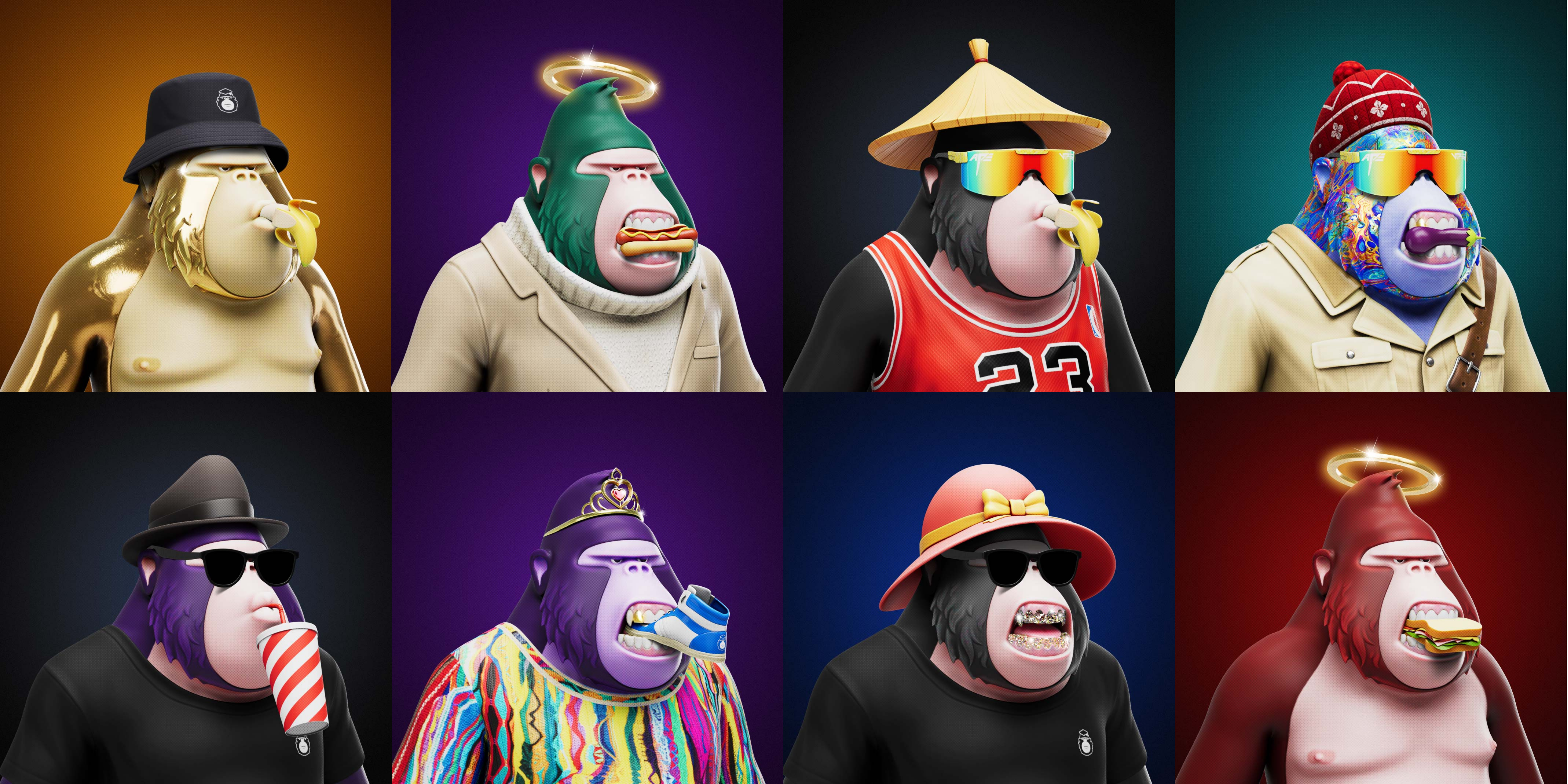 The Degenerate Ape Academy is a Solana blockchain-based NFT community featuring non-fungible gorillas. During their release in August, users could mint their very own Degenerate Apes for just 6 SOL - all 10,000 of which sold out in just eight minutes. This hype took Solana's native cryptocurrency to new all-time highs, further increasing the value of each ape. Degenerate Apes are sold on Solanart.io, the top marketplace for Solana-based NFTs. Currently, the cheapest ape is for sale for 30 SOL. The most expensive ape for sale is listed for 106,696 SOL.

CryptoPunks, Bored Apes,  Pudgy Penguins, and Degenerate Apes are only a few of the many popular NFT communities on the market right now. Do your research to find one that matches your taste in art and preference for online communities.

Your best chance of getting your hands on a valuable NFT without spending big money is through minting. Minting an NFT refers to the act of purchasing a newly created NFT from the creator. You will learn about new projects and minting opportunities by actively scanning NFT Twitter, Discord servers, and NFT marketplaces.

When it comes to minting, you typically pay a relatively small fee in exchange for a brand-new, randomly assigned piece of digital art. You never know what you are going to get, much in the same way as when you buy a pack of Pokemon or basketball cards. Some NFTs have more rare attributes than others - with rarer pieces typically selling at much higher prices than their more common counterparts.

Considering the popularity of NFT communities at the moment, it's safe to say that we can expect more projects to sell out quickly, similar to what happened with the Degenerate Ape Academy.

With great popularity comes people attempting to take advantage of that popularity for their own malicious gain. To avoid scams, always use the links sent in official announcements from the company itself.  Never trust links shared from any source other than official accounts. Only trade on verified marketplaces like OpenSea or Solanart. Do not trust peer-to-peer transactions.

Always check the official Twitter account or Discord server of the projects you are interested in for flagged accounts and known spam. If you happen to see some suspicious activity, report it to the community!

Are you feeling ready to dive into the wonderful world of NFTs? If not, that is okay. NFTs definitely aren’t for everyone. But, for many, they are a fun new way to enter the world of art as an investment or act as a membership badge to flourishing online communities.