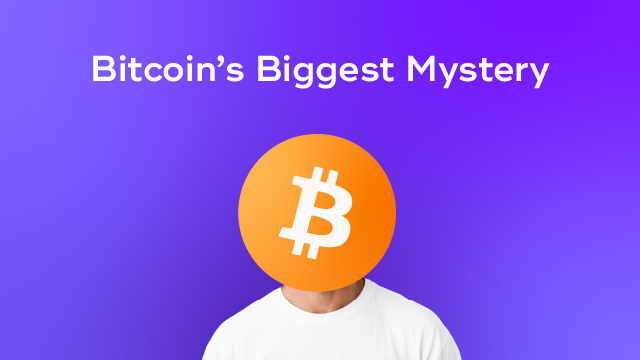 Bitcoin is known worldwide for introducing a new level of transparency to the world of financial technology. All transactions on the blockchain are public, traceable, and permanently stored within the Bitcoin network. Despite this unprecedented transparency, the world's first and most valuable cryptocurrency is shrouded in one of FinTech’s greatest mysteries - who really invented Bitcoin?

The Bitcoin white paper is the document that started it all. In 2009, a paper published under the name Satoshi Nakamoto detailed for the very first time a compelling vision of a peer-to-peer electronic cash system. The name Satoshi Nakamoto is believed to be a pseudonym used to conceal the identity of the true creator. Satoshi hasn’t been heard from since 2011 when he sent an email to a friend saying that he had “moved on to other things.”

After that, Satoshi Nakamoto disappeared without a trace, leaving many questions about the true identity of bitcoin's inventor.

What We Know About Satoshi Nakamoto

The idea that later became bitcoin began in the early 2000s via an email chain between a group of advocates for privacy via cryptography known as cypherpunks. The cypherpunks were programmers who specialized in inventing techniques for secure communication and believed cryptography was a promising avenue to social and political change.

According to messages from this email chain, Satoshi began coding the first version of Bitcoin sometime in 2007 and shared some of his ideas with other cryptographers in 2008. After that, Satoshi began to share his work with a broader audience than those on the cypherpunk mailing list.

All communication to and from Satoshi was conducted online and rather privately - his online personas lacked any personal background information that would inform anyone as to the actual identity behind the name. Satoshi once described himself as a 37-year-old man living in Japan, but nobody believes this claim.

However, Satoshi did leave behind some other clues that could be useful in determining his true identity.

The Clues To Satoshi’s Identity

Many believe that, rather than being from Japan, Satoshi Nakamoto is from the United Kingdom. Within the Genesis block, the first Bitcoin block ever mined, Satoshi left a message. That message read, "The Times 03/Jan/2009 Chancellor on brink of second bailout for banks." These words, signaling the height of the Great Financial Crisis, were taken from that day's headline of the Times Of London.

Adding to the speculation that Satoshi is of British origin, many liberal uses of British English are made in his writings, such as using British spellings like "favour," the use of the expression "bloody hard," and the use of terms like "maths" and "flat."

Is Satoshi Nakamoto More Than One Person?

Many are convinced that Satoshi Nakamoto is not just one person but a group of people. Members of this camp believe that Satoshi's work is far too complex to be from one person. Satoshi Nakamoto has a deeply refined knowledge of computer programming, economics, cryptography, and peer-to-peer networking. Satoshi must be an absolute genius to have this specific combination of expertise. But, it makes much more sense for a group of people specializing in these fields to have joined together.

Over the years, there have been many attempts to unmask the Bitcoin creator to no avail.

In 2014, Newsweek announced that they had found Satoshi Nakamoto in Southern California. What they found, however, was a 64-year-old retired physicist named Dorian Satoshi Nakamoto. After some time, it became clear that Dorian Nakamoto and Bitcoin's founder shared nothing but a similar name.

In 2015, Wired magazine wrote a profile on an Australian scientist named Craig Wright, claiming they had the strongest evidence yet as to Satoshi’s true identity. Wright, who has several graduate degrees, has made many comments in the past about being heavily involved in Bitcoin’s creation.

Nick Szabo is a computer engineer and legal scholar who conceptualized something called Bit Gold, a precursor to Bitcoin. While Szabo’s previous works are quite similar to Bitcoin, one of the most promising indicators that he could be Satoshi is his writing style which is incredibly similar. Another clue is that both Satoshi and Szabo often refer to the economist Carl Mengers in their work. However, Szabo adamantly denied being Bitcoin’s founder and has always been a prominent figure in crypto since the beginning under his own name, so why would he lie?

The saddest speculation about Satoshi's identity is Len Sassaman, who died by suicide in 2011. Sassaman was a long-time member of the cypherpunk community, a developer on encryption and open-source privacy technology, and an academic cryptographer that extensively researched peer-to-peer technology.

His untimely death coincided with Satoshi's disappearances, taking his own life just two months after Satoshi's final message. That message read, "I've moved on to other things and probably won't be around in the future."

Despite much speculation, the true identity of Bitcoin's founder, known as Satoshi Nakamoto, has yet to be revealed. But why do people care so much about unveiling this character? Perhaps because it is said that Satoshi's original bitcoin wallet holds nearly 1 million BTC worth around $37 billion. These coins have not been touched since they were mined more than a decade ago, and if they were to be cashed out all at once, it could be detrimental to bitcoin's value and would cause a lot of fall out to the greater cryptocurrency market.

For now, the true identity of Bitcoin's founder remains a secret. It is possible that we may never know, and the identity of Satoshi Nakamoto will stay a great unsolved mystery. In my opinion, I believe the enigmatic invention of Bitcoin only adds to its appeal - almost like a masked superhero here to save the global financial system.