Weekly Flip Thru: Can Bitcoin Save the Planet? | CoinFlip Bitcoin ATM

Weekly Flip Thru: Can Bitcoin Save the Planet? 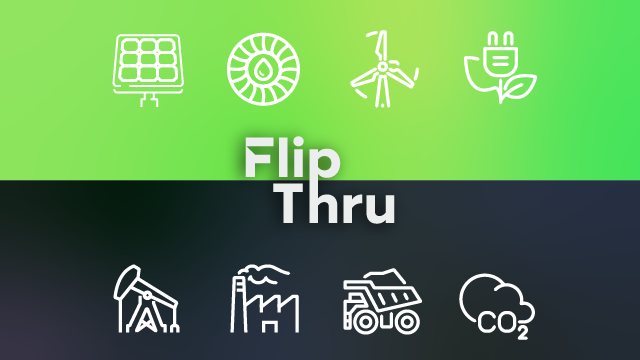 Plant a Tree With CoinFlip!

Want to make an impact this Earth Day? Visit a CoinFlip ATM today to plant a tree!

We are donating one tree for every CoinFlip ATM transaction today, April 22, via EarthDay.org's Canopy Project to help with responsible reforestation.

Visit your closest CoinFlip ATM to make a difference today!

Find an ATM near you.

Can Bitcoin Save the Planet?

While bitcoin naysayers are quick to pass judgment on it and pick out flaws, some enthusiasts believe the cryptocurrency can do no wrong. In hopes of shedding some light on both sides of the coin, I did a deep dive into the two opposing viewpoints within the larger bitcoin energy debate.

Some say bitcoin will destroy the planet, while others say it will save it. While these arguments sound pretty extreme, each of them has some truth backing them up.

While bitcoin is a virtual currency, its protocol uses very real natural resources to maintain the network and create new coins. When people talk about Bitcoin's energy usage, they are usually referring to Bitcoin mining. Bitcoin mining is designed so that it becomes more difficult over time. As the difficulty increase, the hardware used for mining becomes more powerful, using more electricity.

Based on estimates from the University of Cambridge Centre for Alternative Finance, bitcoin uses more electricity than the entire country of Sweden. Another perspective offered by the Cambridge Center is that the amount of energy used annually by the Bitcoin network could satisfy the energy needs of the University of Cambridge for 818 years. No matter how you look at it, there is no denying that bitcoin uses a substantial amount of electricity. Unfortunately, it is estimated that most bitcoin's operations rely on the use of fossil fuels.

This month, a series of coal plant accidents in Xinjiang, a popular area for bitcoin mining, wiped out nearly a quarter of all bitcoin mining operations, revealing just how much bitcoin mining relies on coal power. For a closer look at bitcoin's energy use, check out yesterday's blog.

Ultimately, some anti-bitcoin extremists believe that bitcoin is nothing more than a useless energy suck that will destroy the planet. But, is high electricity use always harmful? How does bitcoin's environmental impact compare to other energy-intensive industries? To formulate a genuinely unbiased and informed opinion of crypto's place in climate conversations, we need to look at the bigger picture. Unfortunately, much of this context is left out from conversations vilifying bitcoin's environmental impact.

To counter the argument of bitcoin's environmentally wicked ways, many bitcoin enthusiasts have spoken out to shed light on bitcoin's unsung environmental benefits. While bitcoin critics play into the idea that more energy use is categorically bad for the environment, ardent supporters believe that mindset misses many nuances of how energy is produced and consumed.

The portability of mining hardware paired with bitcoin's global liquidity means that miners can travel anywhere to take advantage of excess power that would otherwise be wasted. One example of currently wasted energy comes in the form of flared natural gas. Transporting natural gas is not economically viable, so it must be released into the atmosphere or burned off or flared when it is found in remote areas. Bitcoin miners can use this energy that would otherwise be wasted to power their operations. Companies like Upstream Data, Crusoe Energy, and Giga Energy are pioneering this field. There are many examples of bitcoin mining operations that utilize overabundant energy sources that would otherwise be wasted, including mining farms in Iceland, Russia, and the Sichuan and Hunan provinces in China.

Bitcoin's environmental savior argument is rooted in the idea that demand for bitcoin will eventually lead to more wasted energy utilization and other innovations that clean up the global energy sector. As the worldwide energy sector becomes more environmentally efficient, the benefits will trickle down into other industries.

For a deeper look into this perspective, check out the following articles:

While bitcoin is very energy-intensive, its overall carbon emissions represent only a mere sliver of the world's total carbon footprint based on data from the Cambridge Centre's study. While I don't exactly believe that bitcoin is an environmental hero at this time, as it continues to rely heavily on fossil fuels, I genuinely think there are far more egregious environmental wrongdoings in the world.

Overall, it remains clear that bitcoin's benefits far outweigh its current environmental impact. I am confident that the future of crypto will be far more environmentally sustainable, especially as companies like Square are pumping millions of dollars into green energy technologies within bitcoin mining.

The future of bitcoin is bright, but getting there will require dedication from stakeholders industry-wide. We are excited about our Earth Day 2021 initiatives and hope to incorporate more sustainable practices in our business in the future.

Be sure to visit your closest CoinFlip ATM to help us make a difference!