What is Stellar and How Does it Work? CoinFlip Explains | CoinFlip Bitcoin ATM 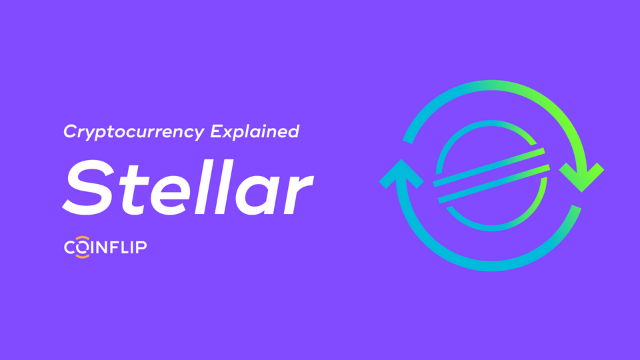 Take a look around your home. You may find coffee grown in Columbia, clothing sewn in India, technology manufactured in China, and so many other examples of goods from other countries that you enjoy from the comfort of your home. Thanks to the global economy, we can enjoy many different products, flavors, and materials that are not native to the country where we live.

The global economy has changed significantly over the last few decades to make our lives more convenient. Yet, despite all the advancements in trade and transportation that make it easy to move products worldwide, moving money across borders is still a costly and time-consuming endeavor.

We depend on the global economy for so much of our lives. Yet, to send money across borders, there are many different factors to take into account. You must be mindful of foreign currencies and their exchange rates, navigating the right payment processor to facilitate your transaction, waiting long processing times, and likely paying exorbitant fees.

Stellar seeks to simplify the process of cross-border payments by uniting the world's financial infrastructure so that money can be moved quickly and inexpensively between banks, businesses, and individuals.

Stellar is an open-source network for currencies and payments launched in 2015 by Jed McCaleb and Joyce Kim. It is used to send any currency to anyone, anywhere in the world quickly at virtually no additional cost. Its goal is to bridge the gap between fiat currencies like the US dollar, euro, and yuan (to name a few) and cryptocurrencies by utilizing the best of both worlds - the widespread use of fiat currency and the decentralization and speed of blockchain technology.

Stellar is unlike other cryptocurrencies and considers itself cryptocurrency-adjacent. Its software is intended to enhance traditional financial systems rather than to replace them. In this way, Stellar is a decentralized system for trading any money, fiat, crypto, and even gold, efficiently.

How does Stellar work?

The Stellar network runs on a web of decentralized computers or nodes supported by individuals and organizations that keep track of data and transactions using a system called the Federated Byzantine Agreement (FBA) algorithm. The FBA enables faster transaction processing because it only uses a portion of the network to approve transactions.

On the Stellar network, each node chooses a set of computers it will always agree with. The node processes the same transactions and keeps its list of transactions aligned with that set of trusted computers. The computer they have selected to depend on, in turn, chooses another set of nodes to agree with. Those nodes then select another group of computers, and so on, until eventually the whole network is covered in an interlocking web of agreement.

With this agreement, every five seconds, the connected computers negotiate to finalize their agreements according to particular rules. Then, the computers cross-check with each other across the entire network, all at once.

Because Stellar Lumens are not mined like Bitcoin, it does not take a high-powered computer to run a node. All that is required is about the same processing power as running an email server. So, it is common for companies that rely on Stellar to conduct their business to run their own nodes. Because they have a vested interest in Stellar performing optimally, these nodes are less likely to act maliciously on the network.

How does Stellar facilitate cross-border payments?

As mentioned above, the current approach to sending money around the globe is complicated. Suppose you are a business owner ordering supplies from China. You have US dollars, but your supplier expects a Chinese Yuan deposit in their bank account. In this case, you might consider using a traditional bank to send the money. The funds must go through your bank and pass through many different intermediaries to convert from USD to Chinese Yuan and ultimately land in the supplier's account. The conversion is lengthy, and you will likely face many additional fees throughout the process.

To connect financial systems and people to move money around the world quickly, Stellar created its token, Lumen (XLM). XLM is the native asset of the stellar network and serves as a universal translator between currencies. Stellar has a decentralized exchange built into the protocol. If there is no fair exchange available between dollars and yuan, Lumens act as an intermediary. So, if you used the Stellar platform to send money to your supplier in China, it would convert your USD to Lumens and then convert those Lumens to Chinese Yuan as it deposits the funds into your supplier's account. This transaction takes only 5 seconds to go through and costs less than one cent to send.

What are Stellar Lumens (XLM)?

In addition to acting as a currency intermediary when needed, Stellar's native token Lumen is also used to pay transaction fees. The base fee for a transaction on the Stellar network is about .00001 XLM, or $0.00000178. The more complicated the transaction, the higher the price, but as the Lumen exchange rate is low, the fee will usually be less than one cent.

As mentioned before, Stellar Lumens are not mined. When the network was launched in 2015, 100 billion XLM were created. In October 2019, that supply was reduced by 50 billion, and no more will ever be added. Twenty billion XLM are in circulation today, and the rest is held by the Stellar Development Foundation that runs Stellar.

Today, one XLM is worth $0.48, with an all-time high of $0.89 in January of 2018. Over the last year, XLM's value increased by more than 1,000%, making it one of the more bullish alternative coins. Stellar Lumens are currently the 14th largest cryptocurrency by market capitalization.

The benefits of the Stellar platform do not extend only to businesses purchasing supplies from overseas. Those sending money across borders to loved ones can also benefit from the Stellar protocol. Remittances are money sent to support a family member in another country. As discussed before on this blog, remittances can be costly and take several days to process. With stellar, migrant workers can send money to their home countries in five seconds for a fee of less than one cent. So, suppose a Mexican worker living in the United States wants to send $20 to their mom in Mexico City. In that case, they can use Stellar to ensure their mom will receive $20 worth of Mexican pesos in her bank account at virtually no additional cost.

To learn more about how cryptocurrency can empower migrant workers and facilitate remittances and cost-effectively, check out this blog.

Are you interested in purchasing some XLM? You can convert your cash to XLM cheaply and quickly at a CoinFlip ATM. Click here to find your closest location!