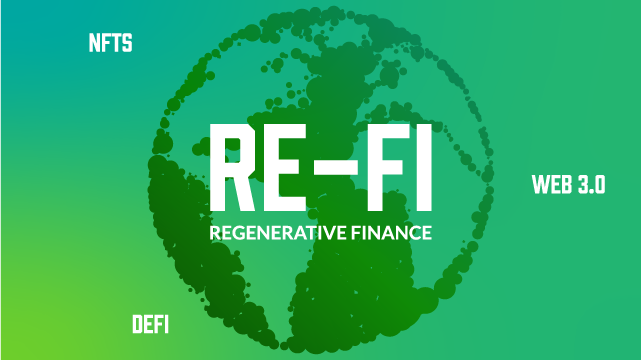 There are many ways to celebrate Earth Day, like spending time in the park or swapping out your car for your bike, but one way you probably haven’t thought of is learning about blockchain. Specifically, learning about how blockchain can support environmental sustainability and improve the climate crisis.

On the whole, cryptocurrency and climate are generally not paired together in a positive light. In fact, when it comes to climate impact, cryptocurrency is more often criticized for its high energy consumption, though this conversation is becoming increasingly debated for its validity when compared with the traditional financial system. There is much to be said as well for the renewable energy consumption of the blockchain industry, and further, there is now a much larger conversation emerging about cryptocurrency and climate, often referred to as Regenerative Finance, or ReFi.

What Is Regenerative Finance (ReFi)?

ReFi brings together a growing movement of climate conscious blockchain practitioners who are championing blockchain’s suite of decentralized technologies as a critical component of our global solution to the climate crisis. We typically talk about blockchain as the technology that enables cryptocurrencies, but blockchain technology can be leveraged in many more powerful ways beyond digital currency. For example, blockchain is the foundation of DeFi, NFTs, and Web3.0. Similarly, ReFi leverages the decentralized ecosystem powered by blockchain, including NFTs and Web3.0 tools, to create a financial system that adds value to - or regenerates - our environment, rather than its current extractive approach. ReFi attempts to answer the question, “How might we design an economic system that incentivizes environmental restoration?”

The dialogue around ReFi is highly theoretical because it is still early in its conception. Existing real world use cases like tokenized carbon credits, blockchain-enabled crop insurance, and improved cross-border collaboration infrastructure help illustrate the monumental potential ReFi can have on our climate future.

Carbon credits are one of the most common ways anyone from a multinational corporation to an average joe can offset their carbon footprint. Carbon credits put a price on regenerative activity, such that when one entity engages in environmentally sustainable activity, they can monetize it and sell it to another entity as a carbon credit, which are typically purchased to offset environmentally harmful activities.

Through NFTs, carbon credits can be tokenized and tied back to specific offset activities. They can then be traded on any decentralized exchange, and then “retired” so they cannot be double counted. One of the greatest challenges of the current carbon market is that different carbon credits represent different real environmental impacts, usually differentiated by price. Companies looking to purchase carbon credits quickly and affordably may not pay attention to the environmental value of their credits, buying credits that are limited in actual carbon reduction. NFT-based carbon credits, like anything in the decentralized economy, increase the transparency and traceability of carbon credits back to their real world impact, making it harder for faux-carbon activity to be sold as a valuable carbon credit. They also increase the accessibility of the carbon market.

Farmers are one of the populations most vulnerable to climate change as changing weather patterns threaten their livelihoods and homes. Smart contracts can help farmers increase their resilience to this risk by, in the short term, improving the accessibility and accuracy of crop insurance. Farmers can be insured against weather-related disasters such that if a season’s crop is ravaged by a flood, farmers will be protected against financial ruin. Further, the smart contract will deliver the payout immediately, which is particularly critical for farmers who may have been relying on the harvest for their own household’s food.

In the long-term, smart contracts can incentivize farmers to take risks and invest in regenerative farming practices which tend to require high upfront costs. By using satellite imaging to trace when ecological improvements happen, such as new trees being planted, farmers can be instantly rewarded for their efforts. This increases the likelihood that farmers will make the transition toward regenerative agricultural practices, and increase their financial returns by doing so.

The Paris Agreement is an international treaty committing the international community to make collective contributions to limit global warming to below 2°C. However, as well intentioned as the Paris Agreement is designed to be, the way emissions are currently counted is inconsistent and there is no uniform system for individual countries to be held accountable to their commitments, nor are they necessarily aware of other countries' progress. This is where blockchain presents a considerable upgrade to the outmoded limits of collaboration as they stand today. The Blockchain for Climate Foundation is advocating to “put the Paris Agreement on the blockchain” to provide the infrastructure for cross-border collaboration on emissions reduction. The Foundation asserts that “emissions reductions outcomes are the most important, and soon to be among the most valuable, assets of the world.” Building a coordinated infrastructure to facilitate emissions reduction is critical to make the process efficient and effective.

The UNEP has announced that we need to halve emissions globally, and the UN Secretary General has called current climate conditions a “code red for humanity,” It’s fair to say that when you hear the statistics around the climate crisis, it’s hard not to feel overwhelmed. But the good news is that we may already have the tools and information we need to reach our target emissions reduction, and progress has already been made. Integrating blockchain into this toolkit can strengthen and expedite our coordinated efforts to reach global climate goals.